John Charlton OBE DL was an English footballer and manager who played as a defender. He was part of the England team that won the 1966 World Cup and managed the Republic of Ireland national team from 1986 to 1996 achieving two World Cup and one European Championship appearances.

Charlton spent his entire club career with Leeds United from 1950 to 1973, helping the club to the Second Division title (1963–64), First Division  title (1968-69), FA Cup (1972), League Cup (1968), Charity Shield (1969), Inter-Cities Faith Cup (1968 and 1971), as well as one other promotion from the Second Division (1955–56) and five second-place finishes in the First Division, two FA Cup final defeats and one Inter-Cities Fairs Cup final defeat. His 629 league and 762 total competitive appearances are club records. He was the elder brother of former Manchester United forward Bobby Charlton, who was also one of his teammates in England’s World Cup final victory. In 2006, Leeds United supporters voted Charlton into the club’s greatest XI. 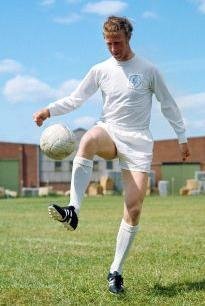 Called up to the England team days before his 30th birthday, Charlton went on to score six goals in 35 international games and to appear in two World Cups and one European Championship. He played in the World Cup final victory over West Germany in 1966, and also helped England to finish third in Euro 1968 and to win four British Home Championship tournaments. He was named FWA Footballer of the Years in 1967.

After retiring as a player he worked as a manager, and led Middlesbrough to the Second Division title in 1973–74, winning the Manager of the Year award in his first season as a manager. Jack kept Boro as a stable top-flight club before he resigned in April 1977. He took charge of Sheffield Wednesday in October 1977, and led the club to promotion out of the Third Division in 1979–80. Charlton left the Owls in May 1983, and went on to serve Middlesbrough as caretaker-manager at the end of the 1983–84 season. He worked as Newcastle United manager for the 1984–85 season.

Jack took charge of the Republic of Ireland men national team in February 1986, and led them to their first World Cup in 1990, where they reached the quarter-finals. He also led the nation to successful qualification to EURO 1988 and the 1994 World Cup. Charlton resigned in January 1996 and went into retirement.

He was married to Pat Kemp and they had three children.

Born into a footballing family in Ashington, Northumberland, on 8 May 1935, Charlton was initially overshadowed by his younger brother Bobby, who was taken on by Manchester United while Jack was doing his national service.

The economy of the village of Ashington was based entirely on coal mining, and though his family had a strong footballing pedigree, his father was a miner. The eldest of four brothers – Bobby, Gordon and Tommy – the tight finances of the family meant that all four siblings shared the same bed. His father, Bob, had no interest in football, but his mother, Cissie, played football with her children and later coached the local school’s team. As a teenager she took them to watch Ashington and Newcastle United play, and Charlton remained a lifelong Newcastle supporter.

At the age of 15 he was offered a trial at Leeds United, where his uncle Jim was left back, but turned it down and instead joined his father in the mines. He worked in the mines for a short time but handed in his notice after finding out just how difficult and unpleasant it was to work deep underground. He applied to join the police and reconsidered the offer from Leeds United. His trial game for Leeds clashed with his police interview, and Charlton chose to play in the game; the trial was a success and he joined the ground staff at Elland Road.

Charlton played for Leeds United’s youth team in the Northern Intermediate League and then for the third team in the Yorkshire League; playing in the physically demanding Yorkshire League at the age of 16 impressed the club’s management, and he was soon promoted to the reserve team. Charlton was given his first professional contract when he turned 17. He made his debut on 25 April 1953 against Doncaster Rovers, taking John Charles’ place at centre-half after Charles was moved up to centre-forward.

Charlton returned to the first team in September 1955, and kept his place for the rest of the 1955-56 season, helping Leeds win promotion into the First Division after finishing second to Sheffield Wednesday. He was dropped in the second half of the 1956-57 campaign, partly due to his habit of partying late at night and losing focus on his football.

He regained his place in the 1957-58 season, and stopped his partying lifestyle as he settled down to married life. In October 1957 he was picked to represent the English Football League in a game against the League of Ireland.

Charlton caused controversy early in the 1970-71 season as in an October appearance on the Tyne Tees football programme, he said he’d once had a “little black book” of names of players whom he intended to hurt or exact some form of revenge upon during his playing days. He was tried by the Football Association and was found not guilty of any wrongdoing after arguing that the press had misquoted him.

Leeds finished second in the 1971-72 season for the third successive time, this time ending up just one point behind champions Derby County after losing to Wolverhampton Wanderers at Molineux on the final day of the season. However Charlton managed to complete his list of domestic honours as Leeds beat Arsenal 1–0 in the FA Cup final.

Charlton was limited to 25 appearances in the 1972-73 campaign and suffered an injury in the FA Cup semi-final against Wolves which ended his season. After failing to regain his fitness for the final, he announced his retirement.  He played his testimonial against Celtic, and was given £28,000 of the £40,000 matchday takings.

Charlton married Pat Kemp on 6 January 1958, and his brother Bobby acted as his best man. They had three children: John (born in January 1959), Deborah (born 1961) and Peter, who was born just after Charlton senior played in the 1966 World Cup final.

During the 1960s he ran two clothes shops in Leeds, and he also later operated the club shop at Elland Road. Charlton was a keen amateur fisherman.

He was appointed an OBE in 1974. In 1996, he was awarded honorary Irish Citizenship. The honour amounts to full Irish citizenship; it is the highest honour the Irish state gives and is rarely granted. In 1994, he was made a Freeman of the city of Dublin, and was given an the honorary degree of Doctor of Science (D.Sc). He was posthumously awarded Presidential Distinguished Service Award for the Irish Abroad in 2020. In 1997, he was appointed a deputy lieutenant of Northumberland. There is a life-size statue of him at Cork airport in Ireland, representing him sitting in his fishing gear and displaying a salmon. On 4 December 2019, he was made a Freeman of the City of Leeds along with the other members of the Revie team of the 1960s and 1970s, but was unable to attend the ceremony.

He revealed in his 1996 autobiography that he had a strained relationship with his brother Bobby. Jack felt Bobby began to drift away from the Charlton family following his marriage to Norma, who did not get along with their mother. Bobby did not see his mother after 1992 until her death on 25 March 1996 as a result of the feud, though he and Norma did attend her funeral.

Charlton died at his home in Northumberland on 10 July 2020 at the age of 85 after suffering from lymphoma and dementia.

WHO IS DAVID LAMMY BIO, AGE, EARLY LIFE, CAREER, GIRLFRIEND AND NET WORTH.

WHO IS AUSTIN RIVERS. BASKETBALLER’S BIO, EARLY LIFE, CAREER, GIRLFRIEND AND NET WORTH.

WHO IS DILLIAN WHYTE (BOXER) BIO, EARLY LIFE, CAREER, WIFE AND NET WORTH.

WHO IS DAVID LAMMY BIO, AGE, EARLY LIFE, CAREER, GIRLFRIEND AND NET WORTH.

Get the latest Sports, Celebrity News and all Trending news only from Cradle-Info, your one stop website for accurate information.
© Copyright 2021 - Cradle-Info